Excerpt from Chapter 5 of Living Abroad
by Cathy Tsang-Feign, PhD 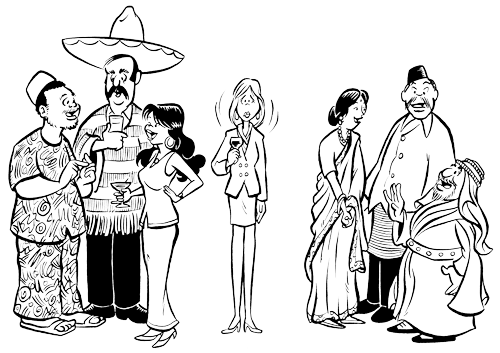 “I'm so frustrated! I feel such a misfit here,” said Christina, in tears. “At work I'm the boss, yet in social settings I'm the oddball.”

Christina, an architect in her early forties, moved to Malaysia over twelve months ago. Both she and her husband went abroad for job advancement and are satisfied careerwise. Christina spent the past several months adjusting to the new environment and job, and now is trying to build a friendship network. To her disappointment, she finds she can't relate to most women she runs into socially.

Regardless of feminist attitudes in most Western societies, the fact of the matter is that among expatriate communities, most men work and most of their wives don't. Often this is due to language or visa restrictions. Nevertheless, it can make those women who do pursue a career abroad feel out of place.

Back home, Christina had good social support and many working female friends with whom she could share intellectually and talk about work as well as personal interests. In Kuala Lumpur she finds she has to go against great odds to make friends. When she hits it off with someone, the person may suggest. “Let's get together for afternoon tea.”

“Afternoon tea! What they mean is expat women in this town don't work, and they assume you're the same,” Christina said with a smirk.

She finds it difficult to identify with people she meets socially. “How long can a person carry on talking about antiques, jewelry or shopping?” Christina said. She finds it uncomfortable to share things she is interested in talking about, especially things related to work. She is afraid of being perceived as a show-off. She also senses other women's uneasiness around her because of their lack of common interests. She feels lonely and dissatisfied and frequently cries in front of her husband.

Christina is experiencing identity confusion. She feels distressed at not being able to identify with those who are supposed to be her peers. Though such people are of the same socio-economic level, same gender, and same or similar culture, they seem to be worlds apart from her.

She used to associate with working female professionals back home, whereas presently all she runs into are mostly non-working wives. This poses a big conflict in her. She begins to see herself more as the “weird” one than the norm, as she used to be back in her home country.

On the other hand, Christina feels somewhat righteous being part of the workforce and tends to hold herself above the other wives, who she sees as nonproductive. At the same time, she cannot help feeling jealous toward these people. They can afford not to work and enjoy having time to do things that Christina never has the leisure to do.

The ambivalence of both disapproving of and envying others' lifestyle causes her confusion. But her strong self-image as a productive working woman makes her reject the other women's way of life. Gradually she develops a self-centered attitude, colored with cynicism. Such an attitude helps turn people off, which in turn makes her more bitter. This becomes a downward spiral.

Meanwhile, her attempts to penetrate into the local community have created another disappointment. Christina finds her local Asian colleagues keep her at a distance. They may be friendly, but no one allows her to get to know them closely. In their eyes, she remains the outsider, even though they all work together.

This causes her further frustration and confusion. She doesn't seem to fit into either group. People in Christina's situation are bound to feel left out, alone and unhappy. It is not uncommon that they may question who they are.

In fact, what Christina is experiencing can be likened to culture shock. After all, she is no longer living at home and what she now encounters—the “antique and boutique clique”—is just part of the local expatriate culture. As with other local customs, one doesn't have to like or become part of it, but accept it for what it is. She needs to adapt and make the best of the situation rather than totally reject whatever is different from her former experience. Christina's need to feel useful and capable is important to her. By no means should she stop pursuing her career. However, she needs to be aware of her own cynicism. It causes her to pass hasty judgment on any foreign woman she comes across. This will further sabotage her opportunities to meet potential friends. Such an attitude also keeps her isolated and helps sustain her loneliness.

People like Christina have to learn to accept the fact that the price for their career advancement may mean some social sacrifices, particularly within the limited environment of an expatriate community. They may not be able to associate with the type of people they were used to back home. Instead of turning sour, they need to learn how to live with it and be open for new opportunities to make friends.