Excerpt from Chapter 10 of Living Abroad
by Cathy Tsang-Feign, PhD 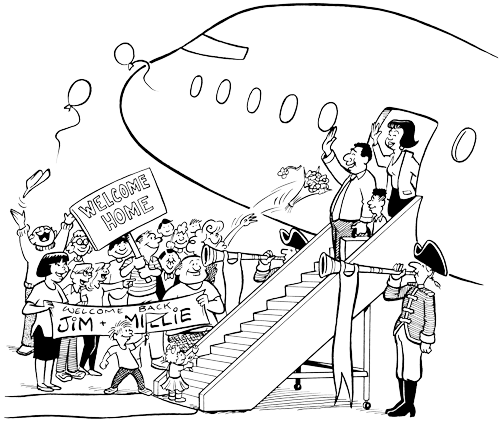 Returning to the homeland involves more than packing and farewell parties. Psychological preparation for re-entering the home country is just as important. However, the issue of “reverse cultural shock” is often overlooked by returning individuals and families.

Stanley and his wife Karen have just spent six years in a conservative, predominantly Muslim country.

Moving back to their native Scotland is obviously going to be something of a shock. But because it is “home”, they do not anticipate the adjustments they will have to undergo to fit back in to their chilly northern European society.

Returning home after an extended stay abroad is both exciting and stressful. After all the physical and mental strain of packing, shipping, tying up loose ends and leaving, one looks forward to arriving and quickly settling down in a comfortable, familiar environment. In actual fact, once they have returned home the hard part has just begun, something which takes most returning expatriates by surprise.

Reverse cultural shock is actually more difficult to deal with than the original cultural shock experienced when entering a new land. This is because most people don't anticipate the need for adjustment when returning to their home country.

In order to understand reverse cultural shock a person needs to remember what they actually went through in the initial cultural shock when entering a foreign country:

ELATION: Usually during the first several weeks in a new culture everything is fresh and new. A newcomer feels excited and elated.

HOMESICKNESS: When the excitement wears off, a person is confronted with daily life in the new society, where everything can be quite different from back home. Some people refuse to adapt to the new culture, associating only with their own crowd and remaining aloof from the local population.

TRANSFORMATION: After about nine months, they feel more familiar with the environment and begin to see the good side of the new culture. They gradually adopt the new ways of living. Sometimes people in this stage may go to another extreme, rejecting their own culture and viewing everything back home as “unsophisticated” or not as attractive.

ACCULTURATION: When people learn how to integrate the “old” and “new”, they can fully appreciate their own origin as well as the new culture.

When expatriates relocate back home after having been away for a long time, they are likely to experience similar stages of acculturation. This is called “reverse cultural shock”:

ELATION: Welcomed back by long-missed family members and friends makes a returnee feel secure, knowing this is his or her “real” home. They can enjoy driving on a big wide road or strolling along the street without pushing through crowds. Things seem so pleasant and calm at home. Such feelings remain for the first several days or weeks.

RE-ENTRY SHOCK: Fitting right in to the home circle and returning to “normal” life doesn't happen overnight. The fact is, a recent returnee will feel very different from everyone around. This will make him or her feel delighted and special on the one hand, but on the other it brings confusion and a sense of isolation.

For example, Stanley is very eager to point out that “I've just returned from five years overseas.” By doing so he knows he can draw others' attention and reassures himself that he is unique, interesting and different. It's easy to overdo it, though. Even cashiers and waiters are not exempt from his frequent asides that, “Ha ha. I forgot that's how they do things here.”

Family and friends will demonstrate interest in the returnee's adventures, anecdotes and little comparative comments, though their attention spans seem surprisingly short. At a family dinner, Stanley finds that the relatives are not nearly as fascinated at hearing about the night bazaars and morning prayer calls in Jakarta, as they are in hearing Auntie Beatrice from Inverness describe Uncle Ralph's prostate operation.

To many returnees, this apparent disinterest is a great surprise. It is also a disappointment that leads to feeling disoriented and isolated.

In some cases returned expatriates carry their feeling of being special too far. They may tend to pick on friends and people in general for being unsophisticated or narrow-minded about the world. They will repeatedly draw comparisons between home and the foreign country. For example, saying at restaurants, “This isn't real Chinese food,” or constantly remarking, “You know how cheap that would be back in Indonesia?”

Such commentary will eventually annoy and bore others, who will take it as showing off. These actions will keep people at a distance and make it difficult to readjust to the old circle. Most people are oblivious to whatever changes may have gone on inside a person from living abroad. For the most part, friends and family believe that you still think and act exactly the way they do, as if you'd never left. The returnee may therefore feel inhibited from saying or doing anything that could appear “show-offy”. He or she may be reluctant to discuss any feelings of disappointment or disorientation at being back, for fear nobody will understand.

METAMORPHOSIS: The former expatriate literally has to shed one skin for another. They are in the transitional process of losing their expatriate identity, yet without having totally re-established a new sense of identity for themselves.

Faced with the day-to-day routine, they often begin to long for the favorable lifestyle once enjoyed in the foreign land. The travel, climate, servants, cultural experiences, mingling with an international group of expatriates, as well as the social status and the special treatment they were accustomed to are sorely missed. A returnee may begin to think back to the good old days. He or she may even refuse or resent readjustment to the lifestyle of the home country.

Such a phenomenon is often reinforced by having lost touch with the trends, fashions, popular music and television, and local politics back home. Such disorientation can easily make people lose their balance and feel stupid, vulnerable and alienated. It can lead individuals to conclude that returning was a bad choice.

READAPTATION TO HOME CULTURE: Given time, returned expatriates will re-familiarize themselves with the home environment and appreciate what is there. They finally accept what they have given up in the foreign society and are happy to settle down at home. Readaptation is a gradual process rather than a distinct stage that a person goes through. It will not take place until the individual has passed through the first three stages and is able to understand what is going through his or her own mind.

Understanding the stages of reacculturation does not necessarily make it easier or pleasant to endure. However, reminding yourself when things seem tough that, after all, what you are going through is only normal, is the best—and only—way to deal with reverse cultural shock. It is vital to avoid becoming too skeptical or cynical about the return home and not to run back overseas before giving yourself and family members a chance to cope with the re-entry.

Individuals returning from foreign places need time to readjust and confront their reverse cultural shock. Inevitably, an ex-expatriate will fit back in to the home environment. but he or she always will be a different individual because of their unique experience.

Returnees need to be highly sensitive and not impose their views on others who may not have had the privilege to experience or understand what they had overseas. It is important to resist holding oneself above others and remind oneself not to loudly compare one society to the other. Reverse cultural shock comes as a painful surprise.

Eventually the discomfort and negative feelings will dissipate, and the returnee will fit in and feel comfortable back home. It takes time, as little as six months or as long as two years, before the last vestiges of reverse cultural shock fade away. As long as a returnee is prepared to go through re-acculturation, and is sensitive to himself or herself and to those around, he or she can make the adjustment less painful for everyone concerned.