Excerpt from Chapter 4 of Living Abroad
by Cathy Tsang-Feign, PhD 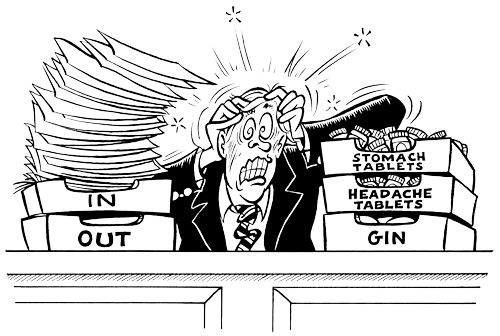 Hard work, responsibility, and a fast-paced environment are not the only factors that contribute to stress. Jealousy, too, which in mild doses can inspire a person to higher achievement, if allowed to fester, will eat up a person inside.

Expatriate society, with its small, close-knit numbers, and its top-heavy professional and economic mix, provides a breeding ground for jealousy. Those foreign residents who don't fit the stereotype of the “glamorous expat lifestyle” are likely to be reminded of this day in and day out by others and themselves.

“It doesn't seem fair. I work hard for my school and students and see what I get.” Gary, 29 years old, pounded his fist on the desk.

“Look at Bill: no talent, but gets all the things you and I ever wanted...fat salary, free luxury housing, car...”

Gary moved to Hong Kong 18 months ago for change and adventure. But lately he has been feeling increasingly dissatisfied, unappreciated and unmotivated. He is tempted to quit his teaching job and move back to New Zealand. He is having a hard time facing himself and suffers from insomnia.

He says that he has become extremely conscious of his social status in Hong Kong. Back home Gary rarely mingled with well-off executives. But here among the small expatriate population he finds a limited social environment. Most of the other foreigners he meets are business people, lawyers, or investment bankers, all receiving healthy salaries and perks, their housing paid for. Conversations typically center around real estate or travel to exotic resorts.

Of course, Gary has some local acquaintances, too. But it's only natural for a person to compare her or himself with others in the group to which she or he most belongs—that is, the expatriate community.

At the beginning he convinced himself that he does have a comfortable life in Hong Kong and he didn't come here expecting to get rich. But more and more he finds himself bombarded by the idea of measuring success in terms of wealth. They travel to 5-star Bali resorts at company expense; he takes budget holidays in Thailand. He rides the bus; they have chauffeurs. Unavoidably, he compares himself with his expatriate neighbors and envies the fancy, high-class lifestyle many of them have.

The growing jealousy causes him to feel more and more discontent. He often returns from parties feeling depressed and resentful, so increasingly he shies away from social gatherings. He finds that being with other foreigners reminds him of his “class” and reinforces his feeling of “failure”. Inside, he is experiencing tremendous struggle.

On the one hand, he realizes that he wouldn't want to change his job merely to pursue higher income. He knows this is the profession he likes. in which he spent many years earning his credentials. Giving it up is really out of the question. But on the other hand, he cannot control his burning envy. Intellectually, he understands that he shouldn't be feeling this way because he is doing much better abroad than back in New Zealand. Yet the jealousy seems out of his control. His turmoil causes him to feel restless and withdrawn and he is unable to concentrate on his work.

Everyone experiences covetous feelings from time to time. In a society like Hong Kong where success is measured by accumulated wealth, you can easily feel like a loser if you don't score high on the materialist scale. Such feelings are further magnified in expatriate circles, where high salaries and luxury living are the perceived norm.

Coveting can easily turn into an addiction for many people and force them to depend on tomorrow to bring them the happiness that today couldn't supply. The more people measure their significance by bank balances and other people's accomplishments, the less they will be able to feel at ease in their daily lives.

Jealousy is not easy for anyone to handle. Gary's feelings in fact are normal and almost unavoidable, considering the Hong Kong (and particularly the expatriate) lifestyle. However, the mere fact that he left home in New Zealand to move far away overseas could be an indication of underlying dissatisfaction within himself in the first place. Thus, for Gary moving back home will not solve his problem. It would be even more devastating for him to later find out that he can run away from the place, yet he cannot run away from himself.

Gary can eliminate the social class gap by making a conscious effort to expand his circle beyond wealthy expatriates. People of a similar economic level to his own would likely be more accepting and more sensitive to his feelings and needs. There are many clubs and organizations in any country, such as sports, hiking, or special interest groups, which have a variety of members from all races and socioeconomic backgrounds.

Gary needs to get a better understanding of himself. He must identify whether his jealous feelings are situational—caused by economic class difference—or from basic dissatisfaction inside himself. Learning more about himself and his own soft spots will eventually help him to adjust to the peculiar world of expatriate society.