Excerpt from the book Living Abroad
by Cathy Tsang-Feign, PhD 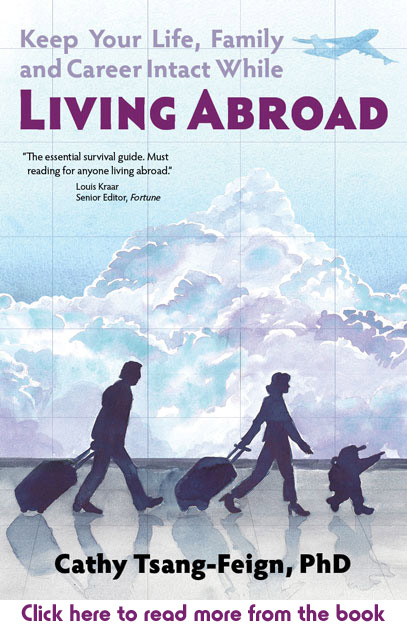 After selling or letting the house, shipping the furniture, and attending the farewell parties, most people feel they are all ready to go. However, moving abroad requires more than just physical preparations.

An individual or family relocating overseas is about to undergo tremendous changes in their life. Besides the normal adjustments associated with moving—setting up house, finding new friends, familiarizing themselves with new geography and climate—new expatriates face a host of other changes.

They will be intrigued—and repelled—by new sights, sounds, smells, and ways of thinking and living. Changes in cultural identity, social position and etiquette will all take getting used to. Foreign languages, dress, food and customs are all part of the excitement and challenge of moving to a new land.

An individual cannot help but react to all the new stimuli and influences in his or her life. The reaction is not a single event, but a mixture and series of emotions, ranging from elation to depression to infatuation to homesickness. This mixed bag of reactions is commonly known as “Culture Shock”.

Most people who move overseas expect to experience this phenomenon. Many believe it is something like jetlag: an adjustment you go through and get over with within a short period of time. In fact, the experience is better defined as acculturation, a process which can last from six months to more than a year.

Anyone who moves to another country will inevitably go through acculturation. Immigrants expect to take on a new cultural identity and therefore are more willing to adjust and adapt. However, expatriates planning to stay only a set period of time usually have no intention to assimilate. For them, acculturation can be as unpleasant as it is unexpected.

“I've only been here four months, yet I just can't wait until my home leave in December!”

Benjamin, a marketing buyer, was transferred to Hong Kong on a two-year contract. A few weeks ago he began to complain about the crowds, the weather, not being understood by his staff, and so on. All he talks about is how much better things were back home. He is homesick.

What Benjamin is going through is the normal process of acculturation. But like him, many people are taken by surprise when it happens.

Whether people choose to or not, they will go through four stages of acculturation. These are:

ELATION: When first in a foreign country, one finds it quite stimulating that most things are so unlike back home. For Benjamin, the exotic Asian sights and sounds and meeting the lively international expatriate crowd were all part of the initial excitement. However, after several weeks, when one has to settle down to everyday life, the differences can turn into annoyances.

RESISTANCE: Frequent comparisons between home and the host country make everything back home seem so much better.

Benjamin is getting annoyed by the frantic pace of life in Hong Kong, the indirectness of Chinese people in business, the crowds and difficulties in being understood. He is frustrated at the narrow choice of English-language entertainment on television or in cinemas and theaters. He finds himself missing his old friends, favorite foods, and the ways of doing things back home. Many foreigners in this stage tend to associate only with others from their own country. They constantly compare everything to “back in England” (or New York or Frankfurt). Such people remain separate from the local community and establish their own secluded, privileged society. Many expatriates remain in this stage until the day they move back home.

TRANSFORMATION: Usually this occurs about nine months down the road, when individuals feel more familiar with the environment and begin to see the good side of the host country.

For example, Benjamin will probably appreciate the efficiency of service and be intrigued by many Asian customs and formalities, which he finds so much more attractive and sophisticated than back home.

Often, people in this stage go to the extreme of rejecting their own culture. Immigrants in particular may try to take on a totally new cultural identity. They refuse to speak their native language or associate with their own countrymen. They tend to view their own culture with a negative attitude and disdain its customs and traditions as backward or crude.

As for expatriates, after months of adjustment they now appreciate the privileged and exciting expat lifestyle: travel, cultural variety, domestic help, etc. They embrace life overseas, no longer wanting to return to the “average”, “boring” lifestyle back home. They may put down people back home whom they see as naïve or narrow-minded. Many get stuck in this stage. They either stay put in this particular expatriate society or move to another foreign country so as to maintain their expatriate lifestyle.

However, no matter how much a person changes outwardly, he cannot shed his roots. Culture is embedded in a person's thinking and behavior. One simply cannot shed one's cultural roots and transform into a different person.

Ideally, people continue the natural course of acculturation to the final stage.

INTEGRATION: Cultural barriers are bridged. Individuals finally learn to appreciate both their own heritage and the new way of life.

Many people remain stuck in the second or third stages, Resistance or Transformation, cutting themselves off from either their new world or the one they came from. These “adjustments” are unbalanced, and lead to eventual frustration and unhappiness. Many of the difficulties and psychological complaints of foreigners in a new land, including stress and family problems, can be directly linked to incomplete acculturation.

Children usually are more easily acculturated or assimilated than adults. The different paces of adjustment to the new culture can put a gap between parent and child. Therefore, parents should not overlook this area.

If expatriates and new immigrants understand and anticipate the four stages of acculturation, much of the stress and turmoil of relocation can be dealt with. Particularly during the second stage, newcomers like Benjamin need to give themselves time for adjustment and not give up and go home.

For more about Culture Shock and other relocation advice, see the book
Keep Your Life, Family and Career Intact While Living Abroad